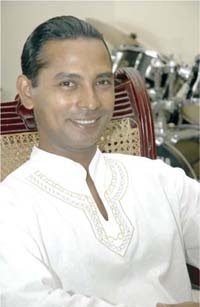 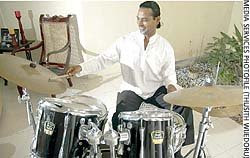 DRUMMING UP A PASSION FOR MUSIC


Christopher Prins reveals how he went from banging on pots and pans to becoming the ‘Most Outstanding Drummer’ at the Golden Clef Awards. Savithri Rodrigo takes note.

Isn’t it surprising that Peter Prins, a legend on the local Western-music scene, discouraged his children from attempting the arts? “My dad worked at Baurs for 40 years. Music was his second choice, but he didn’t believe anyone could make a career out of it,” recalls Christopher Prins. “In fact, when I requested his help to go abroad to study theatre, music or sports, his answer was a firm ‘No!’. But he did say he would fund my marketing studies,” he reveals. The younger Prins says that although they were never taught to play any instruments, he recalls his dad buying a set of drums which was safely stored in a closet. “My brother and I used to sneak it out, play to our hearts’ content and then lock it up again. We got caught many times, I think – but the joy of playing was immense,” he confesses.

Despite continuing opposition from his father, Prins went on to pursue his passion for sport, dancing, theatre and music. Although his accomplishments are many, he is most renowned for being a maestro on drums. In fact, his drumming is versatile enough to accompany a lusty rendition of Hickory Dickory Dock by a posse of Montessori children, jam with Glen Terry and Jerome Speldewinde at their own brand of jazz or play classical music with Dushy Perera. “I can’t read music because I never learned it,” explains Prins. “I play everything by ear… so learning the drum accompaniment to a classical piece was certainly a challenge.”

Prins was born in Kalubowila and lived in Kohuwela for the first 12 years of his life. He loved the neighbourhood environment and missed it greatly when the family moved to the Baurs Flats. “There were no friends to grow up with, but this isolation prompted me to pursue sports and theatre,” says Prins. He speaks fondly of his mother, Blossom, who has been one of the biggest influences in his life. “Mum knew we were all interested in music and took us to the Housewives’ Association meetings to watch The Jetliners perform and to dad’s playing venues, where children were allowed – and she used to dance with us as well,” he discloses. With music coursing through their veins, nothing could stop the Prins siblings from having their own band – replete with broomsticks, boxes and pan covers.

Although he confesses to having been less than average in academia while at school, he was an active figure on the sports field at St. Peter’s. He played for the rugby Second XV and First XV for two seasons, was a member of the college basketball and hockey teams, and a long-distance runner. As a thespian – although he made his stage debut in the kindergarten – he was actually discovered only in his late teens, when Jerome de Silva cast him as Bill Sykes in the college production of Oliver. Subsequently, he played the roles of a disciple in Godspell, Mr. Mistoffeles in Cats and one of Joseph’s brothers in Joseph And The Technicolour Dreamcoat. It was the latter that gave Prins a taste for ballet. “I was about 21 when I started ballet with Aunty Oosha, which I did for about six years. I also sang with the Merry An Singers and was a member of the cast of the mega production Evita, produced by Graham Hatch,” he explains.

Prins credits Antoinette de Alwis for being responsible for his initiation into drumming, which happened “rather late, at 22”. He recalls: “I used to go and bang on the drums when dad’s band rehearsed, but no one took me seriously. One day, Antoinette rushed in saying that her drummer hadn’t turned up and asked me to take his place for a 30-second jingle for a brand of lozenges. From then on, Antoinette used me as the drummer for all her jingles.” But joining the Peter Prins Combo was not a given for the younger Prins: he had to audition for the drummer’s position and be voted in by the band – which he was!

Two years later, he received the rare honour of joining Maxi and Mahogany, when Christo Dhason recommended that Prins take his place. “This line-up was like a dream,” he enthuses. “The best musicians were in this band – Maxi Rozairo, Rodney Van Heer, Ravel Crake and Godwin Perera – playing at the Peacock, which was the hip place at the time,” he reminisces. Prins was also challenged to play a completely different style of music from the dance-band versions he was used to, such as jazz, funk and new pop. Influenced greatly by the likes of Ringo Starr, Prins recalls with gratitude the input of Denzil Lazarus and Basil Paiva, who taught him the basics of music – even the drum roll, which he knew nothing about. He also remembers Tom Menezes, who presented him his first pair of drumsticks when he was seven (unknown to his dad!), as well as Harris Jurangpathy and Telus Anandappa, who took the aspiring young drummer under their wing.

CHRISTOPHER PRINS
DATE OF BIRTH: 24 June 1962.
FAMILY BACKGROUND: Married, with two sons and a daughter; third in a family of one girl and three boys.
ALMA MATER: St. Peter’s College.
STRONGEST BELIEF: “There is a God, and I am accountable for what I have and have not done.”
MOST MEMORABLE MOMENT: Winning the Golden Clef Award for Most Outstanding Drummer.
MOST PRESSING NATIONAL ISSUES: Peace; and the need for politicians to be honest and sincere about what they want to do for the country and the people.
HOBBY: Music – mainly jazz.
FAVOURITE CHILL-OUT: Any place where he can relax with his family.
FAVOURITE COUNTRY: Australia, because of the Australians’ respect for other people’s time, dignity of labour, conveniences and facilities – and their attitude in having facilities and infrastructure for children to grow and develop in any field.
FAVOURITE CITY: Las Vegas, because of the high quality of live entertainment.
MOST ADMIRED LEADERS: Naomal Wijeyaratne, Chairman
of Quantum Tele-Shopping, for encouraging everyone to contribute their ideas towards improving the business; Oosha Saravanamuttu, Jerome de Silva and Mary Anne David, for getting people to believe in themselves and give of their best as a result; former president Ranasinghe Premadasa, for being unafraid to take decisions that he believed were the best in the given circumstances.
ROLE MODELS: Noel and Faith Berman, for their exemplary family values; Glen Terry and Jerome Speldewinde, for taking Sri Lankan Western music to a different plateau.
After a hiatus of two years, Prins was persuaded to play once again for the Peter Prins Combo for a little while. He then joined the Marie de Rozairo Quartet, playing in lobbies and casinos. “This was completely different music, again. It was jazz, but controlled music,” he avers. It was at this time that Kool & The Gang toured Sri Lanka, and Prins had the opportunity of jamming with them. Moving back into his dad’s band in 1992, Prins continued with it for five years, even touring Australia and Dubai. But the musical genius of the likes of Joe Thambimuttu and Kumar de Silva beckoned; and soon, Prins was playing at the newly opened Legends nightclub. With the untimely demise of Thambimuttu, Prins was quickly snatched up by Jeffrey Fernando, who had just formed his band, Blind Faith. “But I simply couldn’t afford the time commitment and had to quit, because I felt I was not pulling my weight enough to allow the band to grow,” Prins concedes.

It is evident that the ponytailed Prins loves his wife, Tammy, passionately. He comes across as a family man who enjoys helping out with household chores. His relationship with Tammy, which evolved over a period of five years during their Youth For Christ meetings, culminated in marriage when Prins was 26. They share an enthusiasm for dancing and have won the married-couples category in the Ballroom and Latin American Dance Championships. “But once the children came along, the dancing stopped – because our days now revolve around school, swimming, singing, music and French lessons, and whatever else they like to do. We both firmly believe that they must be encouraged and their talents brought out,” he affirms. Prins starts his day early, driving 12-year-old Isaac and 10-year-old Rachel at 5.30 a.m. to the pool. Daniel, who just turned nine, joins them in school later on. Prins has dabbled in advertising and PR, but currently works as Director – Marketing And Distribution at Quantum Tele­shopping – a job he enjoys immensely. He puts in a 12-hour day, clocking off in time to pick up his brood from French lessons.

Enjoying interacting with young children and youth via music, Prins feels that the opportunities for their development are vast. He is appreciative that parents today encourage their children to pursue extra-curricular activities. Looking at the future, Prins’s ideal is to retire at 45 – an unattainable goal, according to him. “But once my children have completed their education, I would like to ease back into music, studying its genres more – because there is a void in me that only music can fill,” he asserts.