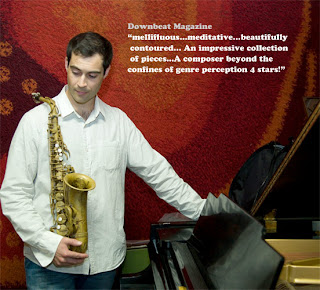 
“Labyrinth is a piece of work that does for jazz what author Walt Whitman did for existentialism, he gives the genre meaning that people can relate to and apply to their own lives.” –Jazz Times
Sri Lankan/Portuguese Australian born saxophonist/composer Jacam Manricks was raised in an extremely musical family.  His parents were resident classical musicians in the state symphony in his hometown of Brisbane and his grandfather was a famous Portuguese jazz clarinetist and saxophonist in Sri Lanka.  As a child Jacam frequently attended his parents’ symphony concerts and was introduced to jazz at home through his fathers’ jazz record collection. Due to these surroundings, Jacam was able to build a diverse musical foundation from a young age that combined jazz and classical music, two genres that continue to influence his music today. Jacam began studying piano at age 5 and the alto saxophone at 9. His formal musical training continued in New York in 2001, culminating with a Doctor of Musical Arts degree in jazz composition/performance/ pedagogy from the Manhattan School of Music in 2007.
As a saxophonist and woodwind player, Jacam has performed and/or recorded with some of the most prestigious international artists of our time. He is a popular figure amongst the New York contemporary jazz scene and a familiar face in venues such as the Jazz Gallery, Cornelia Street Café, Smalls, the Jazz Standard, and Jazz at Lincoln Center.
As a composer, soloist and ensemble leader, Jacam has recorded four albums to date (Sky’s the Limit, Labyrinth, Trigonometry, and Could Nine).  His music has been highly commended in major jazz magazines, websites and newspapers in the United States, Canada, France, Italy, Ireland, Germany, Australia, New Zealand and elsewhere. In 2009 Jacam released his second album Labyrinth, which received rave reviews in JazzTimes, Downbeat, All About Jazz-NY, Sydney Morning Herald and the Irish Times among others.  Labyrinth consists of Jacam’s compositions for jazz quintet and chamber orchestra and features some of New York’s finest jazz soloists (Ben Monder – guitars, Thomas Morgan – bass, Tyshawn Sorey – drums, Jacob Sacks – piano and himself on saxophones/woodwinds).
Jacam is currently promoting his third album Trigonometry, which was recorded in New York in May 2010 (Posi-tone Records). Trigonometry features Jacam’s compositions for jazz quartet and septet, performed by leading New York jazz artists (Gary Versace – piano, Joe Martin – bass, Obed Calvaire – drums, Scott Wendholt – trumpet, Alan Ferber – trombone and himself – saxophones). Trigonometry has been highly praised by writers for international jazz market media magazines, newspapers and websites. These include Jazz Times, The New York Times, All About Jazz, Time Out-New York, The Australian, The Sydney Morning Herald, Ottowa Citizen, All Music Guide, EJazzNews and more. In October 2011, Jacam recorded a new album called Could Nine (Posi-tone Records), which is to be released in June 2012. The album features Jacam’s original compositions and arrangements for jazz quartet performed by internationally respected jazz artists (Adam Rogers– guitar, Matt Wilson – drums, Sam Yahel-Organ, and himself – alto saxophone).
Jacam has received a number of prestigious awards and scholarships for artistic excellence and touring, such as the International Pathways Touring Grant in 2011, the Contemporary Music Touring Program awards in 2010, 2009 and 2008, the Australian National Jazz Award- 2009, the Marten Bequest Arts Fellowship in 2005 and the Queensland Lord Mayors Performing Arts Fellowship in 2000. He has toured extensively throughout Europe, Australia, Canada and the US as a soloist and/or bandleader.
Jacam has composed works for a number of different ensembles worldwide. These include a Suite for Symphony Orchestra and Big Band, which was premiered as a part of the Manhattan School of Music’s 90th Anniversary Celebration Concert in New York in October 2007. The concert featured Jacam as composer/orchestrator and alto saxophone soloist. He has written and/or conducted other works for the William Patterson University Big Band (New Jersey, USA), the Manhattan School of Music Jazz Orchestra (New York, USA), The Mothership Jazz Orchestra (Sydney, Australia), numerous ensembles at the Helsinki Polytechnics Pop and Jazz Conservatory (Finland), the Norwegian Academy of Music in Oslo (Norway Fall-2010), and the Queensland Conservatorium of Music (Brisbane, Australia).
In addition to performing and composing, Jacam is a very experienced musical educator. He has done master classes and clinics at internationally renowned institutions such as the Manhattan School of Music, the William Paterson University (New Jersey), University of Toronto, Mohawk College (Canada) Sydney Conservatorium of Music (Australia, Victorian College of the Arts (Melbourne-Australia), Queensland Conservatorium of Music (Brisbane-Australia), and he currently teaches private saxophone and composition lessons for the New School of Jazz and Contemporary Music.
Jacam received his Bachelor degree in Music Performance from the Queensland Conservatorium, Brisbane, Australia in 2000, his Masters degree in jazz composition and arranging at the William Paterson University in New Jersey in 2003, and his Doctor of Musical Arts (DMA) degree from the Manhattan School of Music, New York, in 2007 as one of the first doctorate-level graduates in the field of jazz composition/performance/pedagogy.