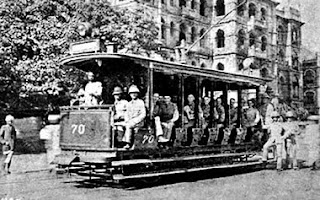 What triggered my memory was an old (very) studio photo of my childhood self staring glumly at the camera while my infant sister timidly leaned towards me. Proudly embossed at the photo’s bottom was “Terminus Studio”. I seem to remember this venerable institution yet standing, till the early 1950s, on the triangular corner where Panchikawatta Road turned into Skinner’s Road towards Technical College.
The ‘Terminus’ of its name meant the end of the line of the very first tramway before it was later extended to Grandpass. The other establishment to honour this now-forgotten mode of public transport was ‘The Tram View Hotel’, a rather dingy tea shop opposite the Punchi Borella Bo tree. The name was probably inspired by the spanking new trams of the late 19th century as they first whooshed past the ‘hotel’ verandah.

The ‘hotel’ retained its name for many years after the last tram clattered to a nameless scrap-yard. As the craze for antiques had not yet taken root, not a single tramcar nor the hotel signboard remains to recall the trams that dominated Colombo’s roads, and carried many thousands of commuters, for well over half a century.

Tramcars seem to have been introduced into Colombo, not long after London, by a British Mayor in the late 19th century. This was an age when motor cars were unknown, the European elite sped to work in rickshaws drawn by wiry ‘coolies’ and ‘natives’ of standing trundled along in ox-drawn buggy carts. Electric tramcars would have been a sensation for the silent speed with which they moved large numbers of people to the far corners of the then ‘Garden City of the East’. Although the steam engines of the CGR carried passengers from town to town, there was no mode of public transport within the city till the advent of tramcars. It is difficult to imagine the sensation they would have caused and the panic they struck in rickshawmen and cart-bulls.

A few First Class seats up in front were reserved for Europeans – the Master Race. Henry W. Cave (Book of Ceylon 1908) devotes quite a few pages to tram travel as the best way of seeing the sights of scenic and exotic Colombo.

The reputed European (what else?) firm of Bousteads owned and operated tramcars under licence from the Municipality. A long arm mounted on the flat roof linked trams to the electricity lines that powered their silent progress. Trams were about the size of a small bus and came in two models. The earliest and commonest, illustrated here, had 10 or 12 long rows of wooden slatted benches in ‘toast rack-style’ facing forward.

The other was rather like a railway compartment with a doorway at the centre, benches along the sides and a ceiling rod for standee passengers to cling to. Some unique features distinguished the “driver’s cabin”. The driver steered the tramcar while standing. Steering was by an impressive metal tiller with a shining brass knob as a handle. At his feet was the button for the loud bell he clanged to announce halting places and clear the tracks of carts, cyclists and pedestrians.

Two broad footboards, one above the other, ran along the length of the tramcar – for the ticket collector’s progress and steps for passengers to mount and dismount.
Trams were very passenger-friendly and had very short runs between halts. I seem to remember about 10 halts between Maradana Railway Station and Punchi Borella. In the same tradition as the CGR, most tram drivers were burly Burgher gents in impressive khaki uniforms. Ticket collectors were drawn from the ‘lesser breeds’. Sadly, there has been no Carl Muller to document the rise and fall of these knights of the tramways.

Although I spent the first six years of childhood in Colombo I cannot recollect travelling by tram at all. So it was in 1946, when I left Ratnapura for a school in Colombo, that I first encountered them with goday wonder. But I soon got reasonably adept in hopping on and off without mishap and forking out the requisite five cents! for travel between two halts. Not long after, I experienced the camaraderie of frequent tram travellers.

As I clambered on to the tram, a descending traveller pressed an unpunched ticket into my hand as a gesture of solidarity. As the son of a school principal, and not yet wise to the ways of the world, I crumpled his gift and conscientiously paid my five cents to the ticket collector. As time went on I learnt the trick of slyly sliding along my bench seat to the end furthest away from the ticket collector working his way along the footboard on one side of the tram. But this manoeuvre could be accomplished only when there were no other passengers between me and the coveted ‘escape seat’. It has to be admitted that such luck was much rarer than the boasts we made of such escapades.

For some inexplicable mechanical reason tramway lines/rails were not above ground but embedded below the road surface.This gave rise to interesting phenomena.
One was the slippage of rickshaw and bicycle wheels into the embedded rails Once he off-loaded his embarrassed passengers, the rickshawman easily lifted his rickshaw out of the rut and trotted off to the clang of the annoyed tram driver’s bell and rude remarks of unruly passengers . The other phenomenon was when a bicycle on a slippery surface wobbled into one of these ruts. Extrication was followed, as usual, by clanging of the driver’s bell accompanied by passenger hoots.

My brother, who had borrowed my bike, fell victim to this misadventure. No sooner had he pulled his bike out than a cart ran over it to the vast amusement of tram passengers and passers-by. But for a bent spoke or two my sturdy ex-Army war-horse, a relic of jungle warfare gifted by an army uncle,was none the worse for the encounter.

My loveliest memory, however, was the wondrous sight when the trams travelled at night over roads that had just been tarred and spread with the requisite layer of sand. As the lighted tram scrunched over this sand it sparkled magically with a myriad sparks.
Somewhere in the 1950s, for some mysterious reason, the Municipality decided to scrap Colombo’s tramways. Some diehard romantics boarded the last tramcar to Grandpass, decorated it with streamers and balloons, and hired a Kotahena funeral band to dolefully belt out the Funeral March to the tramcar’s final halt.

Let this brief piece be a requiem for a charming mode of transport and a way of life long lost to belching buses, skittering trishaws and traffic-jammed cars.

I sometimes wonder whether, in the dead of night, one can faintly hear the clang of a ghostly bell as a phantom tramcar trundles past the Terminus at Panchikawatte and the Tram View Hotel of Punchi Borella on its way to rusty death.
Posted by Faz at 12:58 PM No comments: