Was it fate or a higher power that led jazz legend Billie Holiday into the life of a young and unknown singer from Ceylon to exert such a profound influence on her in their brief friendship? 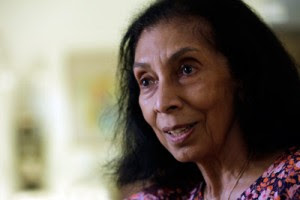 Pic by M.A. Pushpa Kumara
Yolande Bavan will always remember Billie’s words – “Whatever you do when you sing, you tell the truth. Sing the truth. If it’s painful sing that pain. Don’t dodge. Because music you don’t dodge”.
Decades later, at a concert in Colombo, her audience felt that pain, when Yolande sang the Beatles’ ‘Fool on the Hill’ dedicating it to her father.
Misunderstood and assailed by misfortune, he it was who had given her that love for jazz and sent her forth on a journey that would take the wide-eyed, pigtailed slip of a girl from Dickman’s Road, Bambalapitiya to unimaginable heights as a jazz singer and actress in London and New York, to write her own piece of jazz history as the surprise replacement for Annie Ross in the renowned trio Lambert, Hendricks & Ross.
It was as Yolande Woolf that she went to London and when she began making her way as an actress, her friend Indian film director Waris Hussein who had cast her as Cleopatra in the production of Caesar and Cleopatra told her that going as just ‘Yolande’ as she had been doing since she got on stage simply would not do.
“It sounds like a stripper,” he said disapprovingly. “You should be Yolande Bavan – Yolande Bavan from Ceylon.”
She is back in her island home this sunny January on holiday; disappointingly for those who remember her lyrical voice there is no performance, her only engagement a talk at a Rotary luncheon not surprisingly titled ‘All that Jazz’ and time to enjoy the Literary Festival in Galle and an unending supply of tea.
“Too much tea,” she says smiling, remembering how growing up she had disdained tea even though on her stepfather’s estate there was this wonderful aroma of tea wafting from the factory.
“I thought coffee more sophisticated until I lived in London and suddenly had a turn of tastebuds.”
My Sinhalese is coming back, she adds in some surprise, that after sixty years the memory still pries it out from the recesses of her mind.
Yolande’s mother Irene Cecilia Walles was a concert pianist and as young as three she began playing the piano and later breezing through the Royal Academy exams.
That this would be her career was never disputed. But her parents’ shattering divorce left her sister Jean and her as wards of court and necessitated a move from Holy Family Convent, Bambalapitiya to Good Shepherd Convent, Kotahena where the Irish nuns were strict disciplinarians.
Only one Irish American nun realising her passion for music gave her the freedom to sing and play the piano and organ for Mass. But the music lessons with her mother were over and a dream that she and her mother had shared, had died.
Her mother had not even let her have her vaccinations on her arm for it would leave a scar unbecoming on stage, she says. After her mother remarried, Yolande divided her school holidays between her parents.
A painful memory is of being dropped off at one end of Good Shepherd Convent and having to make the long lonely walk across the length of the school, past the deserted netball and tennis courts to where her father would pick her up from the other gate.
Only the orphans were still there in school she says remembering how sorry she felt for them. It pricked her consciousness that they would be so bereft, she says.
Her parents’ divorce left deep scars. To this day, she says she cannot bear raised voices and anger –“I try to stay away from anything that is really jarring,” she says.
But her father later put her into St. Paul’s Milagiriya “a lot of Burghers were there” and in that more relaxed atmosphere, young Yolande blossomed.