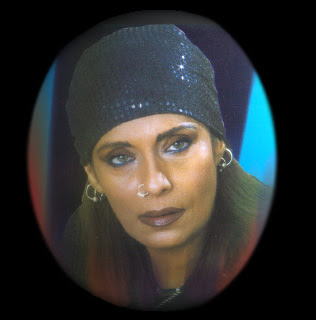 Dalreen - the name echoes with music in the world of show business. Dressed always in black with matching kohl-rimmed eyes, bandana on the head, elegant ethnic bangles and rings on her hands and fingers, she has been photographed, talked about and continuously pursued; she has never been anonymous! Always warm and friendly and ever willing to help out another musician, her phonebook is crowded with numbers of musicians who keep in constant touch with her. Her persona alluringly blends with the throbbing of guitars and drums and wins your instant appreciation. Her charisma on stage is unique and has won her a long line of fans over the years, not only in Sri Lanka, but also in every corner of the world.

Where do we begin to tell the story of Dalreen?

According to her mother Decima, who was a singer herself, Dalreen as a baby used to move her hands and gurgle her own baby notes whenever her mother sang to her even if it was a lullaby! She was destined to be a singer.

Dalreen spent most of her childhood days watching in wonderment as her mother and aunt Mignonne performed on stage as the Kelaart Sisters. The passion to be on stage grew within her and eventually could no longer be contained. At the age of nine, Dalreen made her debut singing Elvis Presley songs and when she turned twelve she was featured on Radio Ceylon, the national radio, with other professional singers. From then on, the child star became the talk of the town.

She joined her first band The Fireflies in 1966. They quickly landed a gig at the prestigious Ceylinco Hotel for the popular Sundown Dances. Soon after in 1967 she was selected by an American agent to sing for the USO in Vietnam. Dalreen joined The Savages which was the first group and female singer from Sri Lanka to perform abroad for the American forces. After a tour of nine months in Vietnam and upon her return to Sri Lanka, the excitement of being on stage led her to sing with The Spitfires, again at the Sundown Dances that by then had become extremely popular at the Ceylinco Hotel.

As Dalreen's popularity grew so did her musical career. In 1972 she made her first European tour and was signed by the Polydor (Ariola) recording label in Germany to record and release three singles. She actually recorded four singles for Polydor, two were in English titled 'Stranger Boy' and 'With a Little Love'. The other two were German songs 'Als der neue tag' and 'Sei weider gut', which she performed on German television. 'Stranger Boy' became a big hit for her.

The years with her bands Amazing Grace and Orpheus at the Little Hut, Mount Lavinia and the Blue Leopard, very popular venues in Sri Lanka, set new trends in music, with Dalreen radiating her never-ending charm. A rock singer in her early years, she also became a familiar figure on stage with leading pop names like Kumar Navaratnam, Upali Fernando and Prince Rajaratnam. Always a survivor in the ever changing musical world Dalreen switched her talents to the Asian music scene. Clarence Wijewardena composed four songs for her which were released on the Sooriya label one of which, 'Chuda Meneke', became an anthem for Dalreen.

After her huge success in Europe, Dalreen was invited by the Travel Agents of the PATA Conference in 1975 to perform at the Sydney Opera House where she sang her Sinhala songs. Soon after there were more tours. Each one of them spelled excitement and happiness for Dalreen making all of her teenage dreams come true. The experience of touring was equally valuable. Her fame has taken her to India, Japan, Hong Kong, Berlin, Australia, Switzerland, Moscow, Rome, Singapore, Kuala Lumpur, Katmandu, London, United States, Canada and the countries of the Middle East.

Dalreen's happiness was great when in 1993 she won two Sunday Observer Golden Cleft Awards one for 'Singer of the Year' and one for 'Trio of the Year' for her group Dalreen and Company.

The publication 'India Today' profiled her as, "...the songstress who turns you on with her songs of love and life. To the people of Sri Lanka she is not just a 'singer par excellence' - she is a symbol - the woman who acts as a kind of ambassador, transporting a part of their world to the world outside..."

Music is an intrinsic part of Dalreen's family. Her two daughters have inherited their mothers' musical talents with the same degree of enthusiasm and commitment. Debbie, her elder daughter, a recognized keyboardist, pianist and singer too, enjoys a successful career as a soloist performing at countless venues and special events. She continues her music as a keyboardist in the popular group Phase 3. Thahani her teenage daughter is a singer in her own right excelling in today's pop music scene. She appears as a soloist in Dalreen's DVD 'Dalreen - Then to Now'. Debbie appears on the same DVD doing harmony and backup vocals.

Not to be left out musically is Dalreen's percussionist husband Thabit who is also a horticulturist and environmentalist at heart, lends continuous support to his musically minded family.

Dalreen is in high demand throughout the worlds musical stages. She recently returned home from a summer tour of the US and Canada with The Gypsies another popular Sri Lankan band.

Message from Dalreen to all her fans:

Music, has always been my life, and today this celebration in song gives me so much happiness.

Winning a talent contest at the age of nine opened the doors to an exciting and fruitful musical career, and never did I think that I would have such a long stay in the scene as a singer and professionally, almost forty years. This is like the dream I had as a kid acting myself as a singer in front of the mirror.

It was no easy trek but my enthusiasm and determination gave me the success I enjoy today.

I cannot proceed without expressing my heartfelt thanks to all those who helped me to be what I am now.

I have always been associated with Sri Lanka's best professional musicians both in the western and Oriental scene, and shared the stage not only in Sri Lanka but overseas as well. I am proud to have represented my country at many International Music festivals and music events.

When I reflect now, I am happy that despite some of the obstacles in my way, I stood my ground and gave up the best by way of my singing to my people and all my fans who never failed to support me through all these years, without you I would be nothing or nobody.

I thank you for being here tonight and being a part of my show "LIFE OF SONG".

Note: This is from Dalreen to her audience (and now for you) at a recent concert in Colombo, Sri Lanka. A DVD of that concert is available and is a 'must have' if you are a Dalreen fan!
Posted by Faz at 2:03 PM