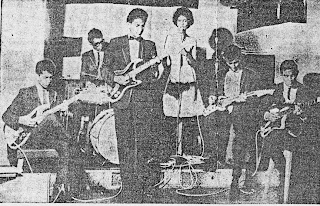 The opening chords of the Shadow's hit 'Shazam' by the original Jetliners switched on an evening of music of the 60s at the BMICH on Sunday December 19 that will long be remembered and treasured.

The Jetliner Reunion Concert was truly amazing, in that the members after such a long time came together to perform to their fans with the same professional verve and vitality they were associated with, in their halcyon days.

It was a pleasure to hear and see Indra Raj still slick and casual with his fretwork that breathed the Shadows fire, and Harris Jurangpathy sounding strong on the skins.

The first set of vocals, was performed by Ishan Bahar who sang 'Young Ones', 'Summer Holiday,' 'On The Beach' and later on in the show 'Funny Feeling I'm Falling in Love With You' and more with the Ishan aplomb.

Mignonne's vocal entry was the appropriate 'Those Were The Days' - sung with a great deal of enthusiasm that immediately drew her fans to her.

There were other songs too 'My Boy Lollipop', 'Mangala Mohotha' which she dedicated to her late husband and Manager of Jetliners Tony Fernando, a vibrant Pata Pata which included audience participation and a rousing Bombay Meri Hai. Her keyboard artistry and arrangements played an important part in the presentation. She was assisted on a second keyboards by Cumar Pieris.

Sohan Pieris back on the Sri Lankan stage swung into the ballads 'Man Without Love', 'Ten Guitars', 'Release Me', 'Green Green Grass of Home' 'Mohair Sam', 'Black is Black', 'Delilah' and 'I Got No Satisfaction' that were lapped up by the audience.

The Original Jetliners Re-Union Concert proved that age was no barrier for showmanship in the music industry which is missing in today's scene.

Their dedication and commitment to their music came through with strength in their performance on stage. The programme was packed with delightful hits of the 60s too numerous to mention due to space.

What a selection they pulled out from the musical chest! Congratulations!

Jetliners shake up Down Under

From a Special Correspondent reporting from Australia

When the curtain went up on January 30 1999 at the Blacktown Civic Centre in Sydney the original Jetliner put to rest doubts and questions in the minds of the Sri Lankan community here whether these six guys, getting together after 35 years, some having quit the music scene completely, could deliver the goods.

The very first note, the very first drum beat after the breathtaking introduction (creatively produced by Sohan and Ishan with the help of Tomie of Sound Shaft Studios, Sydney) had the Sydneyites stunned. As a guest commented, "I didn't know whether to cry or scream in joy. Finally, I did both."

The guitar mastery of Indra Raj (Switzerland) the booming bass of Felix Fernando (Melbourne) and rip-roaring rhythm of Anton Gunavijaya (London) and the dynamic drumming of Harris Jurangpathy (Denmark) zoomed us back to the 1960's and the Coconut Grove of Galle Face Hotel.

Then entered Ishan Bahar (Sri Lanka) beat boy extra-ordinary of the 60s (looking like a page from the swinging sixties) to the strains of the theme song from the Cliff Richard movie the "Young Ones" making everyone feel 35 years younger. And finally to complete the picture came Sohan Pieris (Hawaii) with his smooth rendition of "Man Without Love" which had the couples on the dance floor remembering the good old carefree days. The Jetliners ended the introduction bracket (set) with their version of the Shadows hit "Apache" with footwork, movements and the works.

From then on there was no stopping the Jetliners giving the 525 guests at the Civic Centre the time of their lives with their characteristic renditions of hits of the Shadows, Cliff Richard, Elvis, Englebert to name a few. Saying adieu, with their farewell rendition of the old time classic "May The Good Lord Bless & Keep You" brought tears, flooding us with fond memories of Sri Lanka.

It was no different at the Moorabin Town Hall in Melbourne, the following Saturday, 6th February. The 880 guests were given the full treatment. It was so electrifying that not only did the teeny boppers of the 60's let their hair down, the younger generation, most of them, I'm certain had been dragged by their parents for the show, stood stunned with mouths agape listening to the beautiful, refreshing sounds of the Jetliners, Ishan and Sohan ably supported by the Keyboard wizardry of Raddy Ferreira (Sydney). It was such a "turn-on" some of the teenage girls joined the Jetliners on stage for their final bracket to bump and grind with the boys.

Once again their farewell song was a touching and emotional one.

A special bouquet to Randy Pieris (Sydney) for the great effort to make this "Reunion" a reality. As the "boys" commented in unision, "NO RANDY NO RE-UNION".

Ceylon Observer Sunday April 18 Th. 1965
On top of the Beat 2
Three years ago Tony Fernando telephoned me and said "Come around and listen to a guitar group.I think they have the potential to be one of our top bands in a couple of months."I went over to his home I and met four teenagers. three of them tuning up their guitars looking completely bewildered at l,he amplifiers and speakers that Tony had rigged up for them. The fourth member of the group, a pint-sized youngster was looking for a high stool for his drum set.The boys settled down, hunched over their instruments, tapped out the beat and swung into 'Quarter Masters Store' the tune made popular by the Shadows. They produced a big sound with the accent on a strong be a. The sound was different and Tony had a. big smile on his face when the set was finished.A few months later under the management of Tony Fernando, this combo set Colombo rocking, They were the JETLINERS - the guitar combo The Jetliners - Lucian Perera (lead guitar) Anton Gunawijeya (rhythms) Felix Fernando (bass) and Harris Jurampathy (drums) have come a long way since they plucked out tunes on their home-made guitars. The guitar that Lucian Perera picks out the melody on now was made by him three years ago."I did not have money to buy a guitar, so I built one myself."He teamed up with Anton Gunawijeya at St. Benedict's College where they were student Harris Jurampathy was drumming on a table at a party and the boys noticed that he had a steady beat. hey invited him to play drums and he has been doing so ever since. They spotted Felix Fernando during a concert at Vihara Maha Devi Park end he was playing exceptionally good bass guitar so they talked him into forming the group.
Finance was their big problem. They bought their equipment on instalments End' their big worry was paying up each month. They took a booking on Saturday nights at a night-club for Rs. 50. Lucian Perera said "We figured we could use it to pay for the guitars. But how wrong we were. Hiring the sound system far the guitars cost Rs. 30, taxi hire to transport. us and our equipment another Rs, 15, The Rs,5 left went on taxi hire as we rushed from the nightclub to Beach Road where we were playing on Sunday mornings."
The boys reminisced that the going was tough. Gunawijeya used to borrow a bicycle and carrying his guitar cycled daily for practices which took place at Harris Jurampathy's home, Harris remembered the time when they lost their side-drum which had fallen out of the taxi on their way to Beach Road. They spent the wee small hours of the morning looking far it and were successful. It was in a 'thoose boutique' surrounded by people who were trying to figure out how it got there. It was a let - down for me as the drum was punctured and we could not do anything about it" said Harris.
Tony Fernando heard Ishan Bahar singing one night at the Fountain Cafe. "He put over the beat songs with plenty of drive. What the group needed was a young singer in keeping with the music" said Tony Ishan Bahar was most enthusiastic about singing with the Jetliners and soon he was a featured vocalist, belting out the songs in Cliff, Elvis or Beatle styles,Tony was unhappy that the boys, who were all self- taught, could not read a note of music.He figured that the only way they could improve was by learning music and he insisted that they should do so.It was at this stage nearly two years ago that Mignonne Rutnam came into the spotlight. Tony, who has a knack of picking talent, persuaded Mignonne to join the group. She not only began a happy association with the Jetliners as a pianist, Hammond organist, singer and arranger„ but she also smoothened out the rough edges in their playing.But Tony Fernando was not satisfied. He saw the potential in the combo as a dance baud. He hired two versatile musicians on wind instruments, Nihal Samarasinghe and saybhan Samat and the Jet 8 were born,
by Eustace Rulach
Foot Note: I've forwarded this article to Felix Fernando (who resides in Melbourne, Australia) and he mentioned to me that Eustace Rulach had him and Anton mixed up in the article. The story goes that Lucien met up with Felix at St Benedict's College, Kotahena while performing at a College Talent Show. Lucien invited Felix to join him to form a group (with The Shadows touch). It was the two of them who spotted Anton performing at Vihara Maha Devi Park and invited him to join them. Furthermore, it was Felix, who cycled to Mount Lavinia from Hultsdorf for the group rehearsals.
Posted by Faz at 5:35 PM

I have just seen this post about Jetliners and I have found it interesting. I am from Singapore and have got quite a few records by them. My most treasured is a 1966 EP of theirs with a a very early line up.

Of course Jetliners did play and record in Singapore back in 1969.

A good friend bought three LPs of the Jetliners from a thrift shop in Melbourne. I was so grateful to him.

I know this is a few years late but still it was good to read it.

"Joseph please contact me in view of the Jeliners LP’s - Ebert"
hade_up@yahoo.com.sg