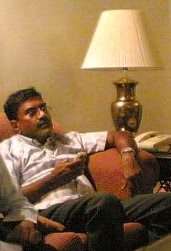 Sitting quietly, reading a book, on a warm Thursday (Aug 13, 2009) evening, in my home in Riyadh, I was simply thrown of my feet and shattered when my mobile phone rang and I received the sad news of the passing away of Firoze Salim Ibrahim, who had suffered a heart attack while on duty at the Reverse Osmosis Water Plant, at the Prince Sultan Air Base in Dhahran where he had been employed as an expatriate contract worker for almost 7 years.