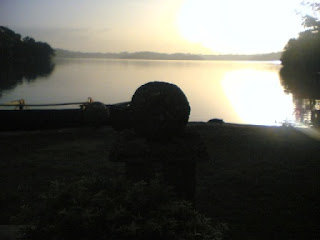 at
We wake up together at dawn, each day, and salute the golden radiation of warm sunshine as it touches the far banks of the Dodanduwa Lagoon and paints the Gin Ganga in subtle shades of colors and hues. Feelings of serenity whisper voices of melancholy and weave Utopian dreams of parading solitude into our hearts and gives rise to an amazing awakening from a silent slumber through the night. The aura invades the innermost crevices of our soul, with emotions from a breathtaking beyond, as our eyes survey the contours of this simple little heaven on earth lurking away in a corner, off the southern coast of and referred to as to all commercial and traveller folks. The beautifully manicured lawn with its foliage feasting in the air emanates the human need for peace and contentment within ruffling showers that fill the flowers with the essence of fresh new fragrances throughout each passing day.
In this exotic environment of beauty and splendor, Martin Lizard King, the silent Water Monitor spells out an ancient love story written by time and narrated through nature’s beauty from generation to generation. In so many ways Martin demonstrates his dignified demeanour and grace as he silently, and in all serenity, plays about on the bounteous land and washes his cares away in the silvery streams of the cool lagoon waters. His steadfast strength moves him on, surviving in a jungle called earth where financially-oriented homo sapiens wait, watchfully, for any opportunity to use him and his fellow creatures for amassing power and profit. I watch him in awe, as he rustles through the dried leaves that have fallen overnight to the ground from the massive Kottang trees that stand tall around encircling the village. 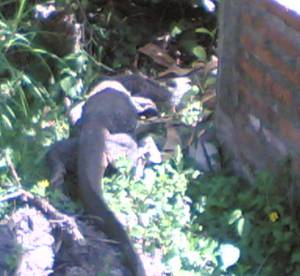 Our friend, Martin Lizard King
Martin Lizard King moves, glides gracefully across the lawn, six feet of sun-kissed hide skirting the mangroves through the grass and sliding silently into the lagoon where he swims in deep delight amidst his fellow water creatures, hoping to catch his daily breakfast and relish it by himself. He then moves up to the surface, his watchful eyes skimming the water line, his webbed feet paddling gracefully beneath, his slithery tail swishing left and right, as he moves regal like a dugout canoe, and shows off to me how great his simple, yet beautiful life, plays out.
That’s Martin, our Water Monitor friend, sleek in design, majestic in float, full of sense and sensibilities of life where his script is written by stealth, silence, shelter and satisfaction, which plays eternally on, like a rhythmic music, every single day and night, until eternity. 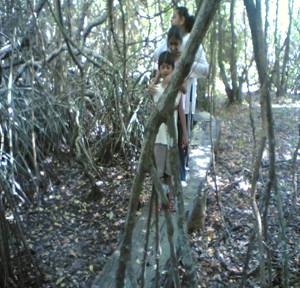 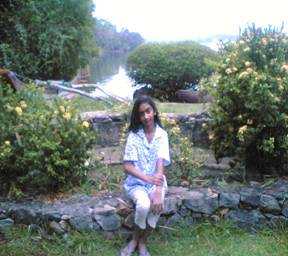 Maria, our grand daughter, amidst the flowers and stone
Not in the least does it cross his mind that far away, in many distant places where streets are named as Wall and Dalal, Docklands count the pennies, and Bulls and Bears engage in mighty conflict perched on top of roundabouts, through each passing day, there are those who seek to wear and display clothing, ornaments and footwear, made elegantly off the skin of Martin and his fellow creatures sun-kissed backs. He does not celebrate the many wonderful people who engage in vociferous campaigns, protests and marches against the illegal trade in animal fur and hide. If he only had the means and ability to send an email to the WTO management to seek their assistance in banning this evil commerce off the face of this planet?
And the sun rolls over to its zenith bringing a fresh lease of life everyday to every living species in and around the lagoon. Even the grasshoppers, with their bright little green trousers, make merry singing, hipperty skipperty high and low on the lawn, enjoying the summer fun as they watch Martin pass by.
Once, every calendar month the full moon rolls over, accompanied by the chanting of the monks in the Monastery located on the island in the middle of the Lagoon, their tingling bells resonating a pleasant melody, echoing across the water and then through the brush of the mangroves. Martin looks up and smiles. The light which the moon reflects suits him fine to seek his dinner. The sound of the bells don’t bother him one bit. 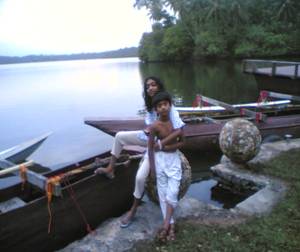 Grandkids, Maria & Abdullah, and the Lagoon
No doubt he has to keep an eye on the predators, both man and beast, who prowl around all day and night. Security is never lacking, not even in his neck of the woods. I watch in amazement as our eight year old grandson, Abdullah, chases behind him with a twig, staying a safe distance away for fear that he may turn around and bite. I wonder what goes on in Abdullah’s mind as he innocently wants to play with the lizard, another young and carefree simple human being with fewer qualms and issues in his heart and mind. How similar they both are in so many ways, and yet, how different too? And how very diverse they will eventually grow up to become in this place we call home? Maria, our eleven year old grand daughter chooses to stay as far away from Martin as possible. She has yet to churn up her courage to get any closer. 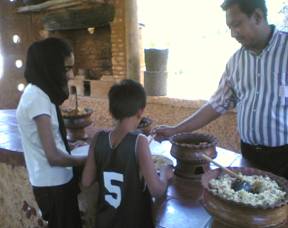 Rice and curry, served style
The tranquillity that this place brings into human hearts cannot be fathomed unless one visits and experiences it at a very personal level. In real time, the appetising aroma that seeps from the kitchen that the owner, Abey, cares for so much with his able chef and assistant, must surely kindle Martin and his friends’ senses even though he knows he does not have access to any of it unless he manages to steal a scrap or two from the waste bins after dark. We relish the food and walk towards the water after the sun has gone down and watch the stillness of the night in absolute awe. If you ever want to conjure up a little bit of Heaven on earth then you must visit before you depart.
Maybe we can change roles with our Lizard friend, borrow  his lifestyle, if not all, at least some sediments, then maybe we too could have a better day, a better life and a better view of what’s around all of us, and learn the rudiments of how to appreciate living, sharing, and contentment?
Thank you Martin for opening our eyes and letting us see the beauty of life, since they’ve been shut in ignorance for way too long. 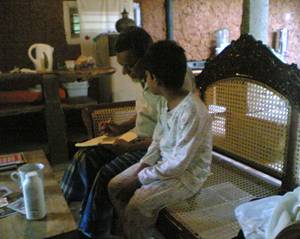 Writing about Martin with young Abdullah, our Grandson, by my side
"Earth and sky, woods and fields, lakes and rivers, the mountain and the sea, are excellent schoolmasters, and teach some of us more than we can ever learn from books." John Lubbock
"And this, our life, exempt from public haunt, finds tongues in trees, books in the running brooks, sermons in stones, and good in everything." William Shakespeare
Posted by Faz at 2:47 PM No comments:

The doyen of Sri Lanka's Finishing School for ladies, Ms Clare Claspersz (daughter of Bobby Arnolda), passes away in Colombo at the ripe old age of 92. May she rest in Peace

Clare, a mixture of pride and satisfaction

An article BY CHANDANI Jayatilleke in the DN of 1-1-2005
CLARE Caspersz is a versatile teacher. At 86, Clare is young at heart; she is active and radiant. And she still teaches her many students in her hotel school. The reason for her ever green attitude is simply her love for teaching and helping youngsters to come up in their professions with poise and confidence.
Clare is the proprietress/directress of the Claremont Finishing School and the Claremont Hotel School in Kotahena. Throughout Sri Lanka, she is known for her ability for training students in hotel management, cookery and social graces.
On October 2, Clare will celebrate three major milestones in her life - her 86th birthday, the 50th anniversary of the Claremont
Finishing School and the 35th anniversary of the Claremont Hotel School.
Clare, who hails from a rich Burgher family, was inspired by her father and his business in the travel and tourism. Her father, Boby Arnolda, ran a very successful business and mingled with many top persons of the business community.
"Those days, after school I went to my father's office and watched how he dealt with various business partners. I think that inspired me to start my own business,"
Clare says recalling her childhood. Clare had a knack for beauty culture, dress making and cookery and social grace. She thought of sharing her skills and talent with many other persons by conducting classes.
That's how she got into the trade and began the Claremont Finishing School. "And I had the right attitude.
When you have the right attitude, you can do anything. I had many people coming for the classes. But I needed to get myself qualified in these fields," she said.
She went to London for further studies and studied in well-known cookery, dress making and beauty culture schools.
"When I came back, I was featured in a Lake House newspaper. With that a lot of people came to know about me and started coming for my classes," she said.
Her school has been visited by many celebrities, diplomats and prominent personalities. Among them were the late Prime Minister Sirimavo Bandaranaike and the late President J.R. Jayewardene.
"Once, we had an exhibition and J.R. Jayewardene came as the chief guest. Following that, he encouraged me to start a hotel school where lots of other young people - both men and women - could benefit."
JRJ also gave her three scholarships to study hotel management in Germany, France and Switzerland. "When I came back I started the hotel school under the guidance of JRJ in 1970."
But she had very humble beginnings. Her success over 50-years is due to her total dedication and commitment to her work. Being a well disciplined person, Clare made her students also disciplined.
This is one reason why her many students have been successful in their professions here or abroad. Clare has immense pride about her students who hold various positions in the hotel trade all over the world.
And several of her students are the proud owners of successful catering businesses in the country. "I am happy to see all my students carry out their work with integrity and respect for their employers," she says.
She put a lot of hard work to build the institution to be a fully-fledged hotel school. In fact her hotel school came long before the Ceylon Hotels School came into existence. "I built this school by piece by piece" she says with a mixture of pride and satisfaction.
Each year, she trains hundreds of students in the hotel school.
Today, Clare is delighted to see many hundreds, if not thousands, of her students placed in top posts.
"I have taught fathers and sons mothers and daughters. I have also given a lot of free training courses to needy students," she says with much pride.
Besides her profession, Clare has travelled all over the world appreciating the beauty and serenity and history of various countries.
Clare's late husband, who was an Army Officer, gave her much encouragement. But he never interfered with her work. She says that he used to say 'Clare is married to her hotel school'. And she used to say, 'He is married to the Army'. However, the Caspersz family had five sons, four of them now live abroad.
Although she is about to celebrate the 50th Anniversary of her Finishing School and the 35th Anniversary of the Hotel School, the sad thing is that this will be the last year of her teaching career. She has decided to retire at the end of the year.
The next generation of youngsters would not be fortunate enough to be trained and get qualified in Claremont under the guidance of bubbly Clare.
Posted by Faz at 10:25 AM No comments: