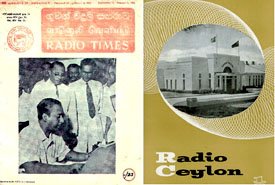 
Walking down Independence Avenue in Colombo you will come across one of thegreatest radio institutions in South Asia. In 2005 Sri Lanka celebrated 80years in broadcasting, a historic landmark. Sri Lanka stands proudly amongthe broadcasting greats - USA, Great Britain and Germany - as a pioneer ofbroadcasting.Broadcasting on an experimental basis was started in Ceylon by the TelegraphDepartment in 1923, just three years after the inauguration of broadcastingin Europe. Gramophone music was broadcast from a tiny room in the CentralTelegraph Office with the aid of a small transmitter built by the TelegraphDepartment engineers from the radio equipment of a captured Germansubmarine.

The results proved successful and barely three years later, on December 16,1925, a regular broadcasting service came to be instituted. Edward Harperwho came to Ceylon as Chief Engineer of the Telegraph Office in 1921, wasthe first person to actively promote broadcasting in Ceylon. He launched thefirst experimental broadcast as well as founding the Ceylon Wireless Clubtogether with British and Ceylonese radio enthusiasts. Edward Harper hasbeen dubbed the ' Father of Broadcasting in Ceylon.'The Sri Lanka Broadcasting Corporation in Colombo, to this day, is one ofthe finest radio stations in the world. It also happens to be the oldestradio station in South Asia. Radio was King in South Asia in the 1950s,1960s and 1970s and Radio Ceylon really did rule the airwaves - the stationwas like no other - it led the field in South Asia.

The Australian administrator, Clifford Dodd ,who came to Ceylon under the Colombo Plan, inaugurated the Commercial Service of Radio Ceylon - Dodd made it anoutstanding success and recruited some of Ceylon's brightest talents.

Radio Ceylon became the Ceylon Broadcasting Corporation on 5th January 1967 headed by the brilliant Director-General, Neville Jayaweera. When Ceylon turned into a republic in 1972 the name was changed to the Sri Lanka BroadcastingCorporation.

The Hindu newspaper placed Ameen Sayani and Vernon Corea of Radio Ceylon in the top five great broadcasters of the world.Radio Ceylon turned young talent into household names among them the musicians of the 1950s and 1960s - Nimal Mendis, Bill Forbes, Cliff Foenander, Des Kelly, Adrian Ferdinands, Tissa Seneviratne, Harold Seneviratne, Douglas Meerwald and the Manhattens to name a few.

Some of Radio Ceylon's programs enjoyed by millions of listeners – the 'Maliban Talent Show' and ‘Take it or Leave it’ sponsored by Nestle’s, presented by Vernon Corea, 'Ponds Hit Parade' presented by Tim Horshington, 'Lama Pitiya' with Karunaratne Abeysekera and 'Binaca Geet Mala' presented by Ameen Sayani on the Overseas Service among them. Other interesting programs were the Volkart Show and Radio Crossword which offered a prize of Rs 100 and whose clues were all related to music, songs, singers, somgwriters, composers, big bands etc.

These were the glory days of the finest radio station in South Asia.

** SRI LANKA. COLOMBO: Long before bullets and suicide bombers gave Sri Lanka dismal global headlines, even as its tourism scene andairline brought it a special aura, Radio Ceylon pioneered a revolutionin broadcasting. Emerging as a trans-national broadcaster andintroducing chatty engagement with listeners, it conquered SouthAsia's airwaves. For aficionados from the `radio generation' spanning the 1950s and1970s, no day was complete without tuning in to Radio Ceylon, nowcalled the Sri Lanka Broadcasting Corporation (SLBC).As it turned 80 on December 16, the SLBC had long lost its position asthe ruler of the region's airwaves. It now competes with a scatteringof private broadcasters and has paid the price for not keeping up withthe times.

SLBC's precursor, Colombo Radio, started off a few years afterbroadcasting made its debut in Europe. Radio Ceylon, as it was calledbetween 1949 and 1972, was catalysed by the shifting of the Radio SEAC(South East Asia Command) to the island in 1949."We were the radio generation. Radio Ceylon was our introduction to Ceylon," recalls Nirupama Rao, the Indian High Commissioner to SriLanka. The SLBC's continued popularity in India was in full force afew months ago. When its Hindi service was discontinued, the IndianHigh Commission in Colombo was inundated with letters from India, andthe programme was subsequently restored.

Enthusiasts remember Tamil broadcaster Mayilvaganam for infusing lifeinto the airwaves. A walk along the corridors of the SLBC building in Colombo --- once a mental hospital --- takes one along the bylanes of broadcasting history. Old studios retain the charm and romance of an
Massive investment is now on the cards. Sunil Sarath Perera, Chairman,SLBC, wants to digitise the collection of "over one lakh Sinhalese,Tamil, English and Hindi songs" and share them with the NationalArchives.Eric Fernando, who started his SLBC career as a broadcaster in the mid-1970s and was its Director-General between 1998 and 2001, is emphatic that "no radio station anywhere in the world can prideitself of such a collection of original material, including 78-rpm records of the 1920s and 1930s." These should be re-formatted digitally and form the basis for a range of attractive programmes, he said.

Foray into commercial broadcasts earned Radio Ceylon a name foritself. But challenges from television, cassette-recorders and privateradio stations, sliced away chunks of its audience and revenue

Thanks for the info. Will have it added to the text. Any other names of announcers and anchors will be greatly appreciated. How about "Sunday Choice"?

I was interviewed by Vernon before I left Sri Lanka in 1972. Vernon was kind enough to play my 4 songs on Radio Ceylon.

I would be very kind if anybody provide me the address of N.Karunakaran who was a malayalam announcer in Radio Ceylon.He was from Kerala, South India.

Sri N karunakaran passed away yesterday.in srilanka. He is my relative.